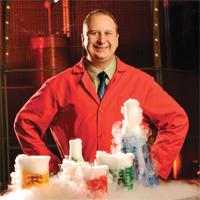 Mike Hennessy vividly remembers “geeking out” in Carnegie Museum of Natural History’s Benedum Hall of Geology as a kid, and catching his first glimpse of the immense, decades-old electrical transformer inside Carnegie Science Center’s Works Theater. “I remember waiting in line, turning the corner, and the amazing reveal of that Tesla Coil!” he recounts, kind of wistfully. Hennessy is a longtime education program developer at the Science Center who absolutely, positively loves science. And he’ll do just about anything to spread that love among his young audiences, including dressing up like Indiana Jones—which, by the way, he happens to like, a lot.

Hennessy is the creative force behind many of the Science Center’s most popular Science on the Road programs, each of which enthusiastically touts a different scientific principle, often using characters with names like Captain Green and Ion Jones. He and a team of fellow educators reach more than 150,000 kids a year in school classrooms and auditoriums, bringing to life the scientific lessons of renewable energy, the chemistry of color, and the ins and outs of the periodic table of elements, among other topics. It’s a labor of love for the seemingly tireless Hennessy, who’s working on adding a biology degree and a master’s in education to his undergraduate degree in history. “My goal is that some of these students will remember one of our assemblies in the same way that I remember experiences from childhood,” Hennessy says, “and it will be something that carries them through as an inspiration, maybe even into a career in science.”

Q: When did you become interested in science?
My folks are both science educators, so   it was always normal dinner conversation. And my mom was my middle school science teacher, so I grew up doing science-fair projects—including the hydroponic radish garden that took over our den when I was in the 7th grade.

You know the glow-in-the-dark stars you can put on a bedroom ceiling? I was the kid who couldn’t have it be random— I had to draw the constellations on my ceiling and plot where the stars went to reflect the night sky.

Q: How would you describe what you do at the Science Center?
The short answer is: I blow a lot of stuff up! But what I get to do—and it’s a lot of fun—is produce our Science on the Road shows, and some of our in-house demonstration shows, too. I write the scripts, come up with the demonstrations and the hands-on stage activities, produce the videos that go with them, and then I get to train the education staff on it. And I get to present to kids, too, which is the most fun.

Q: What’s your favorite show?
Ion Jones and the Lost Castle of Chemistry is one of my favorites … I get to wear that cool fedora! We just have a lot of fun—with big chemical demonstrations that you can only do on stage. It’s a quest to understand the periodic table and how scientists organize data. One of the guiding quotes for the show is from the famous science writer Carl Sagan—that “science is more than a collection of facts; it’s a way of thinking.” So the whole show is about thinking scientifically, and how you perform an experiment to get the data. We went with the Indiana Jones theme because we could tie it back to where these things come from in the earth.

I also love piloting Captain Green’s Time Machine—exploring our biosphere and renewable fuels with students. I get to catch a glimpse of future environmental scientists in the audience.

Q: When did you realize you wanted to be an educator?
It was when I competed in the International Science and Engineering Fair in Hamilton, Canada, as a senior in high school. The opportunity to meet students from countries all over the world, the Olympic-style opening flag ceremony … all of it was indescribably cool. But on the last day, they bused in kids from local elementary schools to tour the displays. I was at my display board talking informally with some students, and somehow an impromptu presentation evolved into two hours of non-stop presenting. I had to cut it short to catch my flight! Making that connection, communicating with those students that day … that was it … that’s the moment I knew I wanted to be an educator.

Q: What inspires you about being an educator at the Science Center?
The kids! The neat thing about the Science Center is that we’re doing informal education, which is such an important part of the pipeline. Just going back to the learning experience that I most remember as a child, which is doing a science project on my own … most of the time, it’s not something that happens in the classroom that has the biggest impact on us growing up.

One of the taglines for our Rockin’ Robots show is that scientists investigate, engineers create, and teachers communicate. I think that, just as important as having scientists and engineers in this region, we really need a new generation of good science educators to communicate and keep the science literacy going—the technical literacy, the eco literacy. I see informal education as being not just a supplement to all of this; it’s a critical piece.

Q: Do you have a favorite grade level to work with?
I really enjoy the early learners and early elementary kids, just because it’s a chance to be a character, to be a little larger than life.

Q: So you’re a ham?
Yeah. They actually believe me as Ion Jones. They’re very forgiving! When we first taped the video for that show, we had a scene where I was running down the submarine, and I was going so slow I kept thinking, ‘I am not Harrison Ford, how am I going to pull this off?’

Q: As much as you love science, your first major was history. Why?
Curious, huh? To this day I find it really valuable. A historical perspective humanizes science. As you take a student through the life and work of a notable scientist, you are, in essence, introducing them to the thought process of experimentation and design. And the history of science itself is intriguing … how societies react to discoveries that challenge our assumptions.

To me the advance of science is not the retreat of magic. The more we learn about the nature of our universe, the more wondrous and mysterious it becomes. And the more answers we find, the more questions there are to ask.

Back to Career Stories